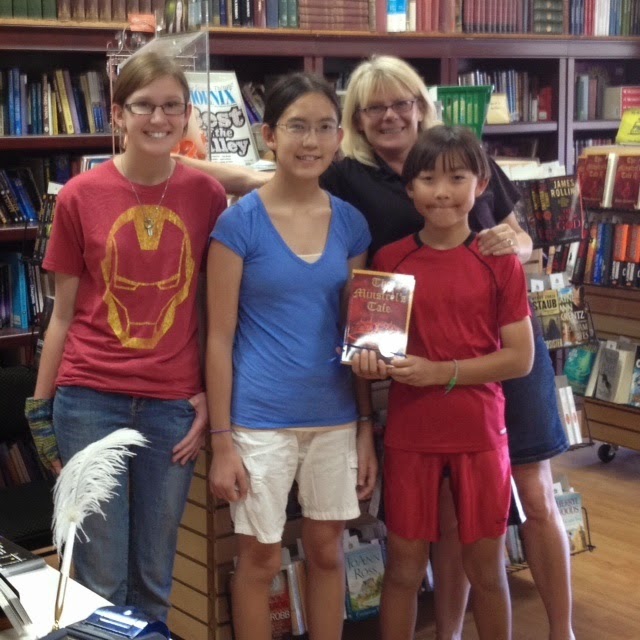 So proud of these guys! Emily, Kimmy, and Spencer downloaded a copy of the Minstrel's Tale during Comicon and emailed me the next day. Not only had they already read the entire book, they had solved the secret message hidden inside of The Minstrel's Tale!

Today, they all came into the bookstore and I was able to congratulate them in person. This wasn't an easy puzzle to solve by any means. It's been three years and no one has even come close to unraveling the secret code. Have I mentioned how much I love writing for smart kids?!
Posted by Anna Questerly at 2:50 PM 1 comment:

I’ve long suspected I was a geek. After attending my first Comicon, I can now confirm it. I wore out my camera within an hour of arriving. The costumes were incredible and everyone was so friendly; happily posing for pictures, flashing smiles, and echoing ‘oohs’ and ‘aahs’ over all the cool Cosplay. (Just learned what this means over the weekend; basically it’s dress-up—which I love to do—and I did get to wear my medieval gowns!)

I couldn’t believe how many people I knew there. Friends I hadn’t seen in years popped up wearing steampunk, Dr. Who, Star Wars, Star Trek, medieval, pirate, and mermaid costumes. Best of all, I made lots of new friends too. It’s so easy to connect with people having fun and, strange as it seems, people seemed to be more themselves when in costume.

The last count I heard was more than 100,000 people attended this year’s event. I believe it. At times, it seemed as if a wall of flesh boxed me in as I tried to exit or enter the building. I found it strange that they didn’t designate separate entrances and exits and everyone was going in both directions through the same doors, creating huge blockages. Nerds are supposed to be intelligent, right? Anyway, by Sunday they did designate one set of doors as an exit, but for some strange reason they used the door on the left and so constantly had to tell people to use the other doors to exit.  (Security from the UK?) I giggled every time I tried to go through it.

After my first day of awe, the old-timers began to show this newbie the cool shortcuts—the secrets of Comicon. How to get from here to there without wading through rivers of people. Where to score the free food, where to find a hidden oasis for a few moments of quiet time, and where to get a decent cell signal.
How did I end up at Comicon? My author-friend, Linda Andrews generously invited Vijaya Schartz and me to share her table to sign our books. I didn’t plan to sell many of my books there, since I write historical fiction, and was pleasantly surprised at the response. Should have known better; I write for smart kids, and it appears the kids at Comicon love to read—everything!

Special Highlights: My friend and cover designer, Don Gerron, submitted a short film, Fists in Flight, to the Comicon contest and won the grand prize! Got to see him accept his award.

Met my new favorite author, Jim Butcher! Here’s the thing; I’m not a fan girl, I don’t care about celebrity, but I have a huge writer crush on this man. After his first panel, I ran up on stage, asked for a hug (and got one!) and then asked him to sign my book. Didn’t have a pen…panicked for a moment until someone offered him one…forgot to get a picture. Later on, this woman comes up to me at my booth and said, “You totally ‘geeked out’ with Jim Butcher, girl.”

It’s funny, for years I really thought the people who attended Comicon were weird and were way too into it and it just wasn’t for me. I was wrong. I found it refreshing and uplifting to spend the weekend with kindred spirits. Book lovers, geeks, nerds…whatever you want to call us…I’m proud to be one of them.